As I have learned through my many fieldtrips around Puerto Rico one of the most common fossils in the Cenozoic rocks are fragments of turtle shells. In fact one of the first vertebrate fossils I collected (back in 2001) was a turtle shell from the Juana Díaz Formation (early Oligocene, ~31 million years ago), which was for a while on exhibit in the now defunct Geology Museum at the Department of Geology, University of Puerto Rico, Mayagüez Campus. As I latter found out, this fossil represented a shell of a pelomedusoid turtle, more commonly known as side-necked turtles. Nonetheless it wasn’t the first time that fossil side-necks or other kinds of turtles were found as fossils in Puerto Rico.
One of the first accounts about fossil turtles from Puerto Rico is found in Rabell-Cabrero (1914) where he briefly mentions the occurrence of turtle costal and neural plates among other vertebrate remains that he had collected. This material was collected around Salto Collazo in the town of San Sebastián (northwestern PR), which means that the fossils came from Oligocene age rocks (Rabell-Cabrero, 1914; MacPhee and Wyss, 1990). Most of the vertebrate material collected by Rabell-Cabrero was later donated to the American Museum of Natural History (MacPhee and Wyss, 1990), while a small portion remained in the Museo de Zoología at UPR-RP (or at least there was when I visited in 2007).

Eventually, some of the specimens collected by Rabell-Cabrero was studied and described by Roger C. Wood and published in 1972. In his paper, Wood describes a shell, plastron and pelvis collected from the San Sebastian Formation (early-late Oligocene age) but due to the incompleteness of the material no species name was given, although similarities with living and extinct South American pelomedusids were noted (Wood, 1972).
Additional fossils of side-necked turtles were discovered in Puerto Rico during the late 1980’s American Museum of Natural History expeditions. These came from early to middle Miocene deposits in northern PR and included a shell, proximal humerus and pubis (MacPhee and Wyss, 1990). Although, as they mention, the material is well preserved, a proper description is still pending. This might be in part because the conservative shell morphology of most pelomedusoids makes identification below family level difficult (Gaffney and Zangerl, 1968; Wood and Diaz de Gamero, 1971; MacPhee et al. 2003).


In the early 2000's a pelomedusoid skull from Puerto Rico was described by Gaffney and Wood (2002). This skull (see photos above) is the type species of Bairdemys harsteini, a new genus that also includes several species from around the Americas, including B. venezuelensis (formerly known as Podocnemis venezuelensis; Wood and Diaz de Gamero, 1971), B. sanchezi, B. winklerae, B. healeyorum, and B. thalassica (Gaffney and Wood, 2002; Gaffney et al. 2008; Weems and Knight, 2013; Ferreira et al., 2015). Bairdemys harsteini was collected from the early-middle Miocene deposits of the Cibao Formation in northern Puerto Rico, in addition to the skull, some shell fragments collected by MacPhee and Wyss (1990) from a nearby locality has been referred to this taxon (MacPhee et al. 2003). One interesting aspect of the Venezuelan species, B. venezuelensis, is that the shells do not have neural bones in the carapace, which might be an autapomorphy of that taxon (the carapace of the other species is still unknown), as neurals seem to be present in the shell material assigned to B. harsteini (Wood and Diaz de Gamero, 1971; Gaffney and Wood, 2002; Gaffney et al., 2008). 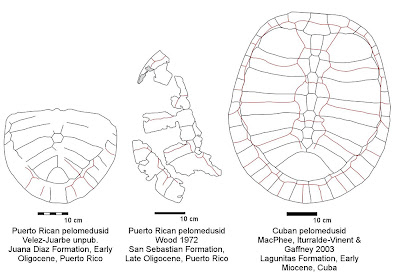 Now going back to the Juana Díaz pelomedusoid I mentioned at the beginning. This shell, although missing about the anterior half, does have at least three neural plates, and seems to have been approximately the same size as the material described by Wood (1972), which also has neural plates. Unfortunately, no additional material from the Juana Díaz Formation has been collected recently, so the precise identity of that turtle is still unknown. Other turtle material I have been collecting over the last 15 years primarily comes from the San Sebastian Formation and Lares Limestone (early-late Oligocene age-northern PR). So far all that material seems to be from side-necks and is fairly similar in size and morphology to the Juana Diaz carapace and the San Sebastian form of Wood (1972) (see drawing comparing these with a Cuban shell mentioned below).

A few other fossil side-necks are known from the Greater Antilles, such as Caribemys oxfordiensis from the Jurassic of Cuba, and an unknown pelomedusoid from the early Miocene of Cuba (de la Fuente and Iturralde-Vinent, 2001; MacPhee et al., 2003). Nevertheless, there is still a lot of work, particularly with the fossils from Puerto Rico as I'm pretty sure there is more than one new species waiting to be discovered/described. This particular groups of turtles is nowadays absent in Puerto Rico, at least naturally, so these fossils, like many others, allow us to get a glimpse into the ancient fauna of the island and understand how it has change throughout its geologic history.

Ferreira, G. S., A. D. Rincón, A. Solórzano, and M. C. Langer. 2015. The last marine pelomedusoids (Testudines: Pleurodira): a new species of Bairdemys and the paleoecology of Stereogenyina. PeerJ 3:e1063.

Wood, R. C., and M. L. Diaz de Gamero. 1971. Podocnemis venezuelensis, a new fossil pelomedusid (Testudines, Pleurodira) from the Pliocene of Venezuela and a review of the history of Podocnemis in South America. Breviora 376:1-23.

Welcome to my blog, here I will post about fossils (mostly vertebrates) from the Caribbean region as well as other extinct critters that I find interesting. I’ll post mostly in English, but sometimes also en Español. Sometimes I might just blog about random subjects. So, once again welcome and enjoy.