Keeping up with the previous post, here’s a picture of the mandible of a Hispaniolan Solenodon. Notice that I have made an enlargement of the anterior part, outline in the top picture, to show the groove present on its second incisor. The red lines outline the borders of the groove. The specimen was collected in the Dominican Republic and is in the collection of the Department of Paleobiology at the National Museum of Natural History. 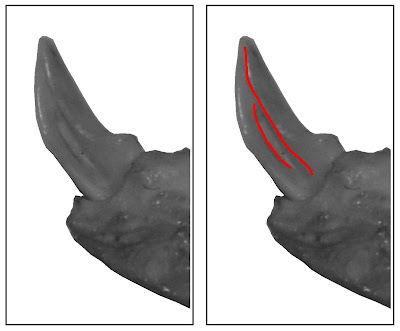 Congratulations to Ville Sinkkonen for guessing correctly the identity of the Marabou stork (Leptoptilos crumeniferus) and the genus of the mystery critter 2, which actually is the Hispaniolan solenodon (Solenodon paradoxus) (full pictures below). I must apologize for taking sooo long in posting the answers, but I’m also adding some interesting facts about this critters, enjoy!! 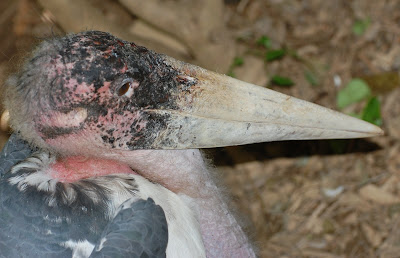 Marabou storks are scavengers, but will also consume frogs, fish and mice; when stalking prey they rely mainly on their vision, but if needed also by tactolocation (Kahl, 1966). One observation made by Kahl (1966), is that along with other birds, marabou storks will wait near brushfires for escaping or injured prey. The skulls of an interesting group of pterosaurs, the azhdarchids, has been likened to marabou storks and other terrestrial stalkers, which together with other morphological evidence has implication for their paleoecology (Witton & Naish, 2008). More on those interesting pterosaurs here.

In addition to Leptoptilos crumeniferus from sub-Saharan Africa, there are two other species known, Leptoptilos javanicus from South East Asia and L. dubius from South Asia. An extinct larger form, Leptoptilus falconeri, from the Pliocene of Africa and South Asia, stood up to about 2 meters and might have been more terrestrial (had proportionately slightly smaller wings) (Louchart et al. 2005). Other fossil species include L. titan from the Pleistocene of Java and L. richae from the Late Miocene of Tunisia, additional species that have been recognize in the past from Asia or Africa have been synonimized mainly with L. falconeri (Louchart et al. 2005). More recently, Noriega & Cladera (2008) described Leptoptilos patagonicus from the Late Miocene of Argentina. This South American record expands not only the range of the genus, but also of the tribe Leptoptilini (op. cit.). It wouldn’t be surprising if these turn out in similar or younger age deposits around western and/or northern South America. 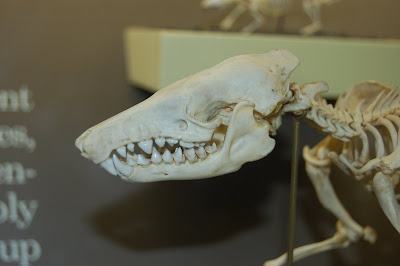 Now on to Solenodon. There are only two extant species of solenodons, Solenodon paradoxus and S. cubanus from Hispaniola and Cuba respectively. According to studies on gene sequences of these living species, they seem to have diverged about 76 million years ago from their common ancestor with other eulipotyphlan insectivores, whereas divergence between the two species seem to have occurred about 25 million years ago (Roca et al. 2004). An interesting aspect of the dentition of Solenodon paradoxus is that one of the lower incisors (I2) has a groove on the lingual side (here), which in the living animal serves for injecting venom (McDowell, 1958). This makes S. paradoxus the only known living mammal with modified dentition for venom delivery. Although this could be used to infer similar adaptation in extinct mammals, caution should be taken when finding extinct mammals with grooved dentition, as the sole presence of a grooved canine or incisor should not be regarded as a definite indication of capabilities of injecting venom into victims (Folinsbee et al. 2007, Orr et al., 2007). If you’re interested in the cranial osteology Solenodon paradoxus there’s a recent publication, Wible (2008), which is very detailed and has very good illustrations.

The fossil record of Solenodon shows that there were at least two other species during the Pleistocene, S. marcanoi and S. arredondoi from Hispaniola and Cuba respectively (Patterson, 1962; Morgan & Ottenwalder, 1993). Older remains, consisting of part of an axial skeleton, were found embedded in amber from the Early to Middle Miocene La Toca Formation of the Dominican Republic; these were described as belonging to a small solenodontid insectivore by MacPhee & Grimaldi (1996).

Solenodon, was not the only insectivore living in the Caribbean region, there was also a closely related form that was found in Cuba, Hispaniola and Puerto Rico, these were the Nesophontes (McDowell, 1958), which will be the subject of a future post.