When you're strange, or how different are the teeth of extant sirenians

Living sirenians (sea cows: manatees and dugongs) are but the remnants of a much more diverse group whose history extends back at least to the late early Eocene (~50 million years ago [Ma]). There are only four living species of sirenians: the manatees (grouped in the family Trichechidae) and including three species: the Antillean manatee (Trichechus manatus)*, the Amazonian manatee (T. inunguis) and West African manatee (T. senegalensis). The other extant species is the dugong (Dugong dugon) that, together with the now extinct Steller’s sea cow (Hydrodamalis gigas), represents the family Dugongidae. 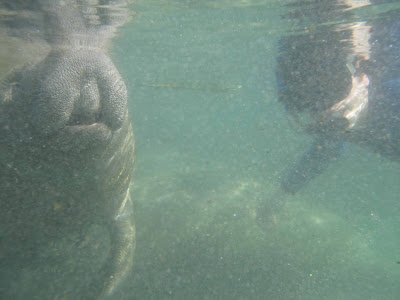 Above, Homo sapiens and Trichechus manatus latirostris. (Pic. courtesy of B. Bonde).

Although overall very similar to their extinct relatives, some characteristics of these extant sirenians are quite different and unique, not really representative of each particular group. One of those characteristics, and the one I will discuss here, is the dentition of Dugong dugon. This species, which lives in the Indo-Pacific region, is characterized by having molars that are best described as nearly enamel-less (a thin enamel cap is quickly worn off), open-rooted, ever-growing pegs (see pictures below), resembling more those of sloths, than those of manatees!! 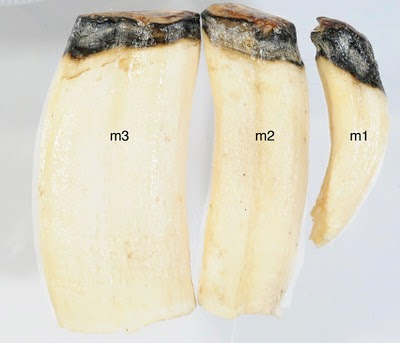 Lower molars of Dugong dugon, notice that root and crown are continuous. The dark area is the part that was exposed above the gum line, hence the staining.

To understand how they differ let me give you a little background info on sirenian dentition. Primitively, the dental formula of sirenians consisted of three incisors, one canine, five premolars* and three molars (Domning, 1994; Savage et al., 1994). Throughout sirenian evolution, this formula has been reduced, first by loss of the fifth permanent premolar in the earliest dugongids (see figure below), then by subsequent loss of second and third incisors, canine and the other permanent premolars. In terms of general features, the molars of most fossil sirenians can be described as bilophodont, with enameled crowns that are clearly differentiated from the root (these being closed and multiple [with three in upper molars and two in the lowers]). These kind of molars somewhat resemble those of the most primitive proboscideans (Sanders et al., 2010), which, by the way, are the closest relatives of sirenians.

*Presence of a fifth premolar is reminiscent of the primitive eutherian condition and, among Cenozoic placental mammals, a pretty unique condition only seen in sirenians (Rose, 2006). 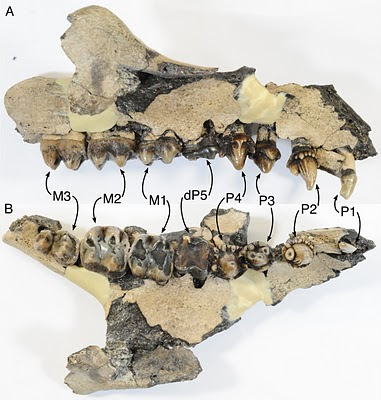 Beginning about the early Oligocene (33.9-28.4 Ma) the dental formula of most dugongids (including Dugong) stayed the same; it consisted of the first upper incisor, upper and lower deciduous premolars 3-5 and permanent molars 1-3 (see A-B in figure below)* (Domning & Pervesler, 2001). Up until the appearance of Dugong dugon the morphology of the molars was, in general, much the same as that described above. The peculiar, somewhat aberrant, dentition of dugong likely evolved quite recently (geologically speaking). Unfortunately there are no fossils of D. dugon to really know when. The best evidence comes from a very Dugong-like sirenian skull from the Pleistocene of Florida (Domning, 2001) (sadly, it is in a private collection). This skull is from sediments that were deposited about two million years ago and is nearly identical to Dugong dugon; one of the few differences, actually the most obvious one, is that its teeth are much like those of earlier dugongids, bilophodont, with enamel and multiple, closed roots. Therefore, if this fossil is taken as the closest ancestor of extant dugong, it would imply that its bizarre dentition is a quite recent (less than 2 million years) evolutionary novelty.

*Or even further reduced from that condition (as was the case of Steller’s sea cow and its closest relatives). 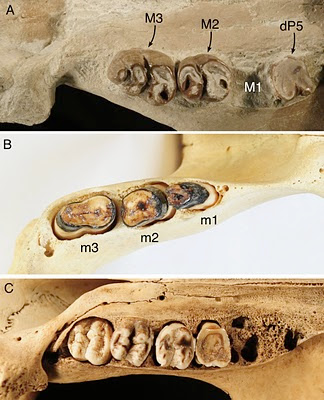 Manatees (Trichechus spp.) also have unusual dentition when compared to dugongids and some of their ancestors (for starters they lack incisors). If you look at the figure above (C) you’ll notice that there seems to be more molars than there should be. And that is correct; manatees have supernumerary molars that are constantly being replaced throughout their entire life (not to be confused with the delayed eruption that characterizes elephants). The molars in Trichechus are also proportionately small, that way more can fit in the toothrow at a given time (sometimes up to eight! [Domning & Hayek, 1984]). The earliest evidence for supernumerary molars in trichechids is seen in Ribodon limbatus, a fossil manatee from the late Miocene (11.6-5.3 Ma) or early Pliocene (5.3-3.6 Ma) of Argentina (Ameghino, 1883; Pascual, 1953; Domning, 1982). Ribodon does differ in that its molars were not reduced, so there were less per toothrow. Other fossil trichechids have the more “normal” type of molars described above.

Anyways there you have it; extant seacows have quite different dentition from their extinct relatives. Of course, there remains the questions of why evolve ever-growing molars, or ever-replacing supernumerary molars. But I’ll leave those for some other occasion.