It’s been quite a while since my last post. A lot has been going on, mostly research-related, which is good. Just last week I was in San Diego where I participated in the Sixth Triennial Conference of Secondary Adaptation of Tetrapods to Life in Water held at San Diego State University. The meeting was a great opportunity to see colleagues as well as making new acquaintances, hat tip to the host committee: Annalisa Berta, Tom Deméré and Eric Ekdale for such a great meeting! The week before that I spent some days visiting the collection at the Natural History Museum of Los Angeles where I got to look at some interesting sirenian and cetaceans, many thanks to Larry Barnes and Sam McLeod for access to specimens.

Ok, so now to the meaty part of this post. Back in 2008 I wrote about the hand of Steller’s sea cow (Hydrodamalis gigas) or more likely the lack of one. Back then I mentioned that G. W. Steller was one of the few people who saw H. gigas alive, and in his account he mentions the lack of fingers in this species. However, so far no hand bones have been found associated with Hydrodamalis gigas or even H. cuestae (see reconstruction below) (the presumed direct ancestor of the former), this lead to skepticism about his observations. So, how was that Steller’s account about the hand of H. gigas was corroborated?

Hydrodamalis cuestae, in left lateral view (picture of the reconstruction on exhibit at the San Diego Natural History Museum). Notice the reduced forelimbs.

The discovery of Dusisiren dewana in the Late Miocene (10-8 million years ago [mya]) of Japan, provided the key elements to support Steller’s account. Dusisiren is a genus of sea cow that include two other, earlier species: D. reinharti from the Early Miocene (20-16 mya) and D. jordani from the Middle-Late Miocene (12-10 mya) (see picture of D. jordani below). The species of Dusisiren together with Hydrodamalis cuestae (see picture above), H. spissa and H. gigas are members of a subfamily of dugongids (which means they are more closely related to dugongs than to manatees) known as the Hydrodamalinae (Domning, 1994; Domning & Furusawa, 1994). Hydrodamalines, as they are also known, ranged throughout coastal waters of the northern Pacific, from Baja California to Japan, with one species surviving until historical times (Domning & Furusawa, 1994). Some distinctive features of this group include, large body size, reduction or loss of dentition, and reduction of the digits, which brings us back to D. dewana. 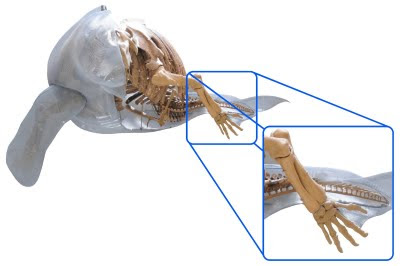 Dusisiren jordani, anterior view (specimen at exhibit at the Natural History Museum of Los Angeles). Notice the "normal" hand in this species.

Described by Takahashi et al. in 1986, the remains of Dusisiren dewana were found in Late Miocene deposits in Japan and together with other elements of the skeleton there was also a nearly complete forelimb, including the hand. These were crucial in providing an insight into what the hand of later hydrodamalines was like. Dusisiren dewana shows reduction of the hand bones, in this respect differing from D. jordani, its predecessor, whose hands showed no reduction of elements (i.e. long metacarpals and long fingers composed of multiple elements) (see picture above). As for D. dewana, the carpals (wrist bones) are quite similar to those of other sirenians, however, the metacarpals (the bones between the wrist and fingers) and the phalanges (finger bones) are reduced, actually extremely reduced in the case of the phalanges (see picture below of Hydrodamalis cuestae). D. dewana as the sister taxon (closest relative/ancestor) of Hydrodamalis spp. is best evidence at hand (unintended pun) supporting Steller’s account on the hand of the sea cow that bears his name and allowing for reconstructions like the one seen here for H. cuestae. 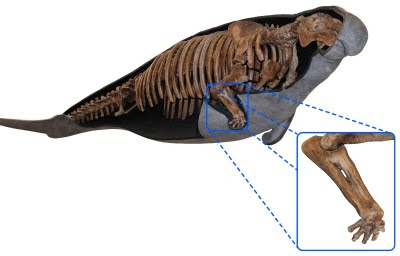