It’s been quite a while since I posted something here as I’ve been very busy since the last post, which you should check out, if you haven’t! The absence was mostly because I’ve been distracted with university-related stuff, work (I had a real job over the summer), meetings and a month-long fieldtrip to the Dominican Republic, which will be the subject of this and the following entries. 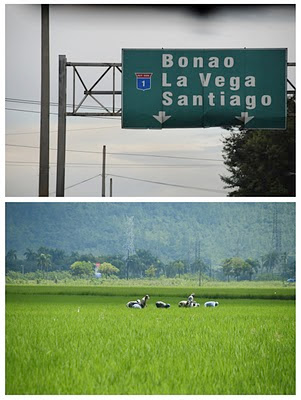 Top: on our way to Bonao. Bottom: some of the beautiful rice field near Bonao. (Click on the picture to see the larger version.)

To begin with, I had never been to the Dominican Republic before; it was actually my first time in another Caribbean island other than my own, Puerto Rico. I did not know what to expect, but I ended up with a very good impression of the island and its people! There were many things I liked, for example, there seems to be a lot of land dedicated to agriculture (which I think is awesome), the food was delicious and of course, the geology is very interesting!!

The focus of the trip to the DR was to collect rock samples and fossils from Early Cretaceous limestones as part of the thesis project of my friend and colleague Alvin Bonilla-Rodriguez from the Geology Department at the University of Kansas. Our collecting efforts were mainly focused in the central part of the country where Albian-age limestones occur. We stayed most of the time near the towns of Bonao in the Monseñor Nouel Province and in Hato Mayor del Rey in Hato Mayor Province. Other people that joined us during our time there were: Luis Gonzalez from the Department of Geology at the University of Kansas (and Alvin’s advisor) and Wilson Ramírez and Hernán Santos from the Department of Geology at the University of Puerto Rico-Mayagüez. The Servicio Geológico Nacional and its director Santiago Muñoz Tapia were also very helpful in terms of logistics and advise.

At first it was hard finding good outcrops, some were heavily overgrown and in other occasions our compact car was obviously ill-fitted for some of the roads we needed to go through. But, by about the middle of our first week we finally found some outcrops, not the best, but it was a start! 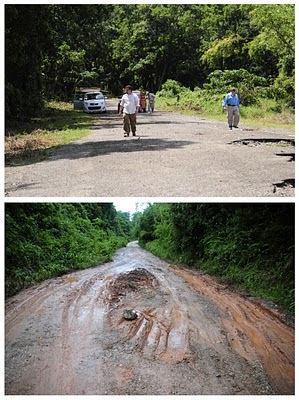 Top: our first official stop, near the southeast corner of Presa Hatillo, the outcrop was completely overgrown. You can see Alvin (left), Luis (right) and Wilson (background), and our (very) compact cars. Bottom: one of the road we manage to get our car trough, there were others which were definitely impassable by our vehicle. (Click on the picture to see the larger version.)

Our luck got better when we moved east towards Hato Mayor. There we found a very nice outcrop (with lots of fossils) of the Hatillo Limestone! The fossils were very important, specially the rudist, for determining the age of the rocks. And yes, we were in the Albian! 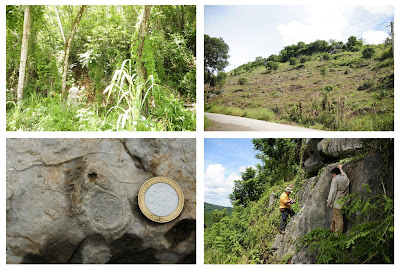 Top left: our first outcrop, yes there is an outcrop in there! Top right: the nice outcrop of the Hatillo Ls is in the top of that hill. Bottom left: Coalcomana ramosa, a rudist, finding this particular species meant we were in the Albian. Bottom right: Hernán (left) and Alvin (right) collect rock samples from the Hatillo Ls. (Click on the picture to see the larger version.)

Well, this is it for this first post. Remember there are more to come, so stick around! On the next post we’ll move from the Albian, to the Miocene!