Hello there dear readers. Today I bring you the second installment of this series. Like I mentioned in the previous post we moved from the Albian to the Miocene.

The Miocene of the Dominican Republic is probably best known for the amber deposits. These have not only produced beautiful amber, which is used in jewelry, but also a number of fossil taxa have been described based on remains entombed in the amber. These fossils consist mostly of invertebrates, however, several vertebrates have been described as well, including anoles, frogs, and an insectivore. This gives us a glimpse into the smaller fauna that inhabited the island during the Miocene, in contrast to what is known from the same age in Puerto Rico and Cuba where most of the vertebrate fossils of that age consist of larger animals (sloths, rodents, primates, sirenians, crocodylians and turtles). A good summary of the vertebrates known from the Tertiary of the Greater Antilles can be found in table 1 of MacPhee et al. (2003) (free download here).

One of our first excursions into the Miocene was on a Wednesday afternoon. We spent the morning collecting the last samples from one of the outcrops of the Hatillo Limestone and some rudists from near the entrance of a cave in that same limestone unit. We then headed west towards the Monte Plata Province where we knew there was a new road cut exposing units of Miocene age. 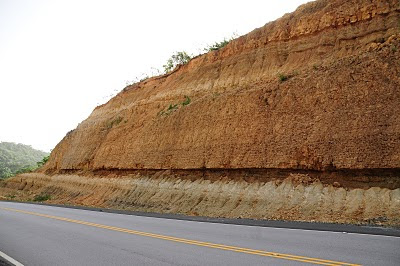 The first outcrop of the Miocene that we visited. This is actually one of the best Miocene outcrops I've seen in a while.

By the time we got there it was near the middle of the afternoon, which meant we didn’t had much sunlight left. We stopped in the first large outcrop we saw (Picture above) and it was worth it! We quickly started finding turtle shell fragments, and occasionally we saw cross sections of turtle shells that went into the outcrop. I decided to collect one of these. It was not big, and as I found out after prep work, not too good (see pictures below). However, it was worth going there, as there is more material to be found and collected! 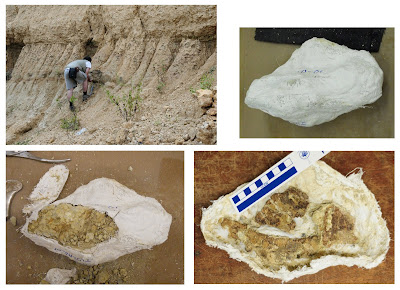 Top left: me overturning the jacket with the turtle shell remains; top right: the jacket back in the lab; bottom left: view of the jacket when it was first opened; bottom right: the fossil turtle remains. (Click on the image to see the larger version.)
Several days latter we had some free time, so we decided to go back to this area. This time we drove in from the north, driving through Los Haitises where we saw beautiful karst topography. Our time was limited in this occasion as well, but we made the most out of it. 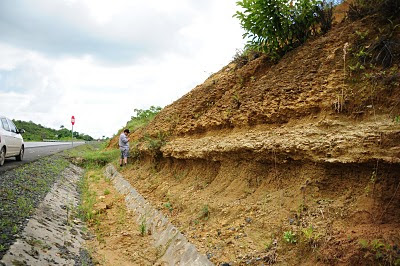 The second outcrop we visited, smaller than the first one, but still interesting. Alvin Bonilla for scale.
We hit a couple of outcrops (Picture above) where we found the usual (at least what usual for the Tertiary of Puerto Rico and Cuba); croc teeth, turtle shells and sirenians (which was what I was really after). The sirenian material was in a concretion, half of it which had fallen off the outcrop so it made it easy to collect. The other part is still in the outcrop and I hope to go back sometime in the spring to collect it. Actually, if it wasn't for Alvin, who saw it, I almost stepped on the part that had fallen trying to get a better view of the part still in the outcrop. After some prep work on the sirenian material it turned out to be mostly ribs, and a few vertebrae. However, even if it is a little frustrating, it will nonetheless be an important contribution to the understating of sirenian distribution during the Miocene of the Caribbean and demonstrates that there is probably more, better material waiting to be collected! 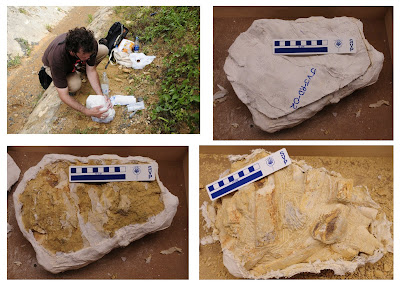 Top left: me collecting the concretion with the sirenian remains; top right: view of the jacket in the lab; bottom left: the jacket, recently opened; bottom right: the concretion, as of now, still need some prep work to be done. Oysters (near the center of the concretion and to the right) used some of the ribs as hardground. (Click on the image to see the larger version.)
MacPhee, R. D. E., M. A. Iturralde-Vinent & E. S. Gaffney. 2003. Domo de Zaza, an Early Miocene vertebrate locality in south-central Cuba, with notes on the tectonic evolution of Puerto Rico and the Mona Passage. American Museum Novitates 3394:1-42.
Posted by J. Velez-Juarbe at 12/02/2010 No comments: