Summertime is normally when geologist and paleontologist engage in fieldwork. For me the last two summers have been different; I’ve spent both teaching in the human anatomy lab at USUHS, which has been a fantastic experience. However, being busy in the summer months hasn’t really stopped me from doing a little fieldwork, fortunately, I work mostly in the Caribbean region where the weather is generally nice and the only thing to worry about is hurricane season…

And so it was that I had the chance to go to Puerto Rico at the end of the summer and in the midst of hurricane season. Every time I go there is both for pleasure and work; I get to see my family, enjoy the food and scenery and with a healthy dose of fieldwork, it makes for the perfect vacation. This time I arrived two days before hurricane Irene (then still a tropical storm) hit the island. I was fortunate to be staying in the northwestern part of the island, which did much better than most other parts. We got rain, lots and lots of it, which kind of messed up my plans for fieldwork a little bit.

Meanwhile, while it rained, I stayed busy looking through fossils I had collected during my years as an undergrad; mostly fish teeth (bony and cartilaginous) and otoliths, which I’ll use for some projects on the works. It wasn’t until five six, days after my arrival that it was sunny and dry enough to go out to the field. Without much time to go to different places, I decided that my best chances for fieldwork were in the vicinity of my hometown, basically here and here. 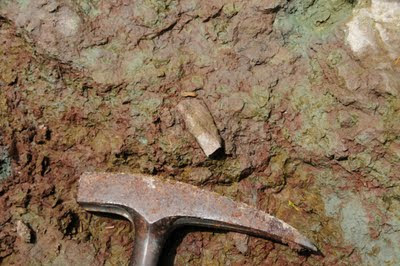 So first I went to the Río G locality where early Oligocene deposits are exposed along the banks of the river. Its one of my favorites and almost always I find something of interest. With all the rain, I was both worried and hopeful. Worried that cool stuff was being eroded away, but hopeful in that new stuff would be exposed. After prospecting for a while and not finding anything more than some sirenian ribs, I made it to the “bonebed” (previously featured here). This time around all that I found was an interesting piece of bone (see picture above), and as it turned out, I had good reasons be worried. If you look at the picture, the part of the bone towards the bottom had broken off, recently, probably during the rain and increased water levels earlier in the week. It doesn’t seem to be a rib, which is why I think its interesting, but due to its incompleteness I’m still not sure what it is… it sounds a bit frustrating, but the best thing to do is to turn that frustration into motivation to keep looking! 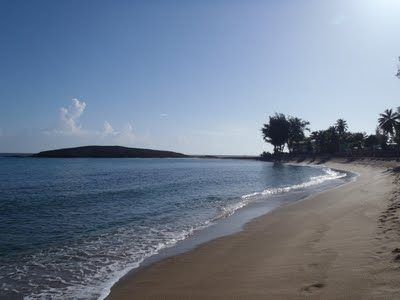 My favorite beach in the Atlantic coast of Puerto Rico. Just how I like it, early in the morning and nearly devoid of people.

My other field excursion was to the beach. Working with marine organisms that thrive in shallow marine environments is always a good excuse for a trip to the beach (specially in the tropics). Staying in my hometown meant that my favorite beach on the Atlantic coast of Puerto Rico was only a 15-minute drive away! I didn’t see any manatee (wasn’t expecting to anyways) but did get to see some seagrass beds (see picture below). 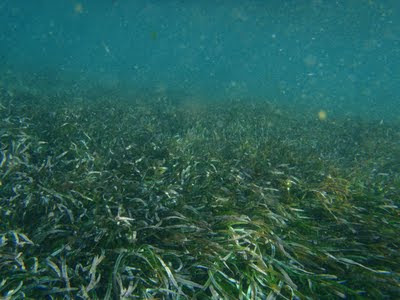 Most seagrass beds in the Western Atlantic and Caribbean region consist of several species, with Thalassia testudinum (turtle grass), Halodule beaudettei (shoal grass), and Syringodium filiforme (manatee grass) as the more common ones. However, the seagrass bed that I was looking at was monospecific (= only one species present). As far as I could tell it consisted solely of turtle grass. Monospecific beds of turtle grass are not uncommon, in fact, Thalassia is what is known as a climax species. That means that it is the dominant species of seagrass; other species (like the ones mentioned above) are only present in small, disturbed patches or at the periphery of the beds. The dominance of turtle grass over other seagrass species and its consequences (like mass die-offs) in historical times has been partly blamed on overkill of large marine herbivores, mainly seacows and green turtles (Jackson et al., 2001). However, this could be slightly different when viewed from a deeper historical perspective. I hope to bring more on this sometime in the upcoming months…