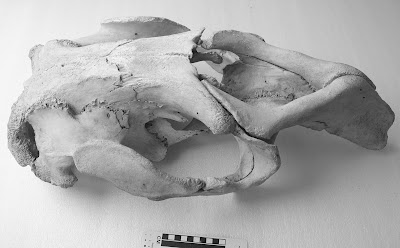 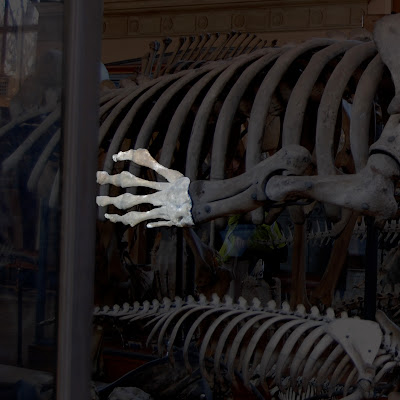 Que pirata se ve la patita!!!
Hey and how do you know that the description of Steller was accurate? Did others saw the same "morphology" on the little "patitas" or in the fossil record? If so why a very reputable Museum such as the one in Paris would commit that mistake?

Domning (1978) also had some very interesting finds to note about the loss of those digits in the fossil record of hydrodamalines. Isn't it fascinating that only hydrodamalines lose digits when other Sirenia keep them even though they rarely use them in swimming (or steering)? Manatees and dugonsg use them to "walk" on the bottom some, but don't seem to reduce them.
On the other hand, cetaceans use their flippers only for steering, but never lose digits (they multiply them, in fact). The functional differences among flippers are so diverse, it would be interesting to see someone do something with that, eh?

Meralis, Steller's description is the best known, but it is not the only one, there were other people with Steller who also describe H. gigas, this is mentioned in Domning (1978). Another, older species of Hydrodamalis, H. cuestae was also fingerless (op. cit.). Why is the exhibit at the Paris museum wrong, well... old & outdated!?!?
Brian, there are certainly some interesting finds reported in that work, specially the modifications to the scapula and humerus possibly related to the loss of fingers and "new" use of the forelimb! I remember recently watching a video of a manatee in shallow water and using the flippers for "walking", lovely!! But why hydrodamalines lost their fingers... could it have been related a preference to look for food in shallower waters, closer to the surf zone, hence the need for limbs modified for "walking" and/or getting a grip on the substrate?
Whales, compared to sirenians, seem to have proportionately shorter humerus & radius+ulna (as well as loss of mobility), so maybe multiplication of digits is their way of having a longer flipper, which they need for steering.

The Harvard Museum of Natural History has a very nice mount, without fingers.

Steller's description is quite precise: "the ulna and radius
terminate bluntly with tarsus and metatarsus [carpal and metacarpal]. There are no
traces of fingers". No specimen of these bones exist,

So H. gigas had tarsus and metatarsus, which were however most probably much more regressed than suggested in the Paris mount. The fingers indeed are wrong.

Btw. the Helsinki museum initially made the same mistake and fitted their specimen with man-made hand and finger bones. These have in the meantime been removed. An old photo can be seen on http://www.sirenian.org/sirenianevolution.html.

The skeleton mounted in the Naturhistoriska Riksmuseet in Stockholm had a bone mounted in the position of a metacarpal, which Domning later identified as the transverse process of a vertebra.

That Paris specimen looks a bit hemmed in - you'd think they've give it a bit more prominence, although I do love those old-school, crowded museum galleries!

The specimen is indeed kind of hidden; It should be more prominent (from my biased pro-sirenian point of view) as it is one of the few complete mounts of this particular species.

From time to time i came to this blog to read the latest findings and info. Excellent!
From and old classmate.