A river runs through an Oligocene sea

The subject of this post is about my second and final day of fieldwork in Puerto Rico. Yes, I only managed to get two days of fieldwork because these were actually some very short vacations and on top of that it was very rainy. Anyways, I already wrote about my first day of fieldwork during which I searched for tetrapods in the Late Oligocene Lares Limestone. Now on my second day I went out to one of my favorite localities, herein referred to as Río G. This locality consists of exposures of the Early Oligocene age San Sebastián Formation along the banks of a river (See the picture below with me as scale and outcrops on each side of the river). The exposures along this river are considered as typical of the basal part of this formation (Monroe, 1980). The lithology of this formation is varied, with some layers representing ancient soils, river channels, deltaic deposits as well as marine units. Of course this is all in a sequence that makes sense with the tectonic history and paleogeography of the region, an interesting subject, which I will not touch at this moment, but might be discussed sometime in the future. 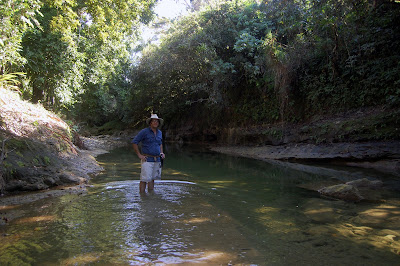 Now, some interesting tetrapods have been recovered from this formation, such as the sirenian Caribosiren turneri, described by Reinhart in 1959. Also from this formation are known pelomedusid turtles, which were previously discussed here. From the Río G locality, one of the more recent discoveries is the skull of the gryposuchine gavialid Aktiogavialis puertoricensis (Velez-Juarbe, et al. 2007). Other tetrapods found here, include sirenians, part of a croc axial skeleton and the oldest-but-crappiest rodent fossil from the Caribbean region. Some of these, like the sirenians are part of my thesis project, whereas the others are still awaiting description or for better material to turn up.

Unfortunately, same as with the prospecting in the Lares Limestone, no new or even useful vertebrate fossils were found in Río G. The most interesting fossil I found was a plant fossil that might be a seed or some sort of fruit (see picture below of the seed/fruit together with a schematic drawing – the fossil measures about 27 mm across). If it actually turns out to be a seed/fruit it would not be the first time that plant “megafossils” are found in the San Sebastián Formation; about 88 taxa of plant macrofossils from this formation were described by Sir Arthur Hollick in the 1920’s (Graham, 1996). I have yet to see Hollick’s (1926, 1928) papers; therefore I still don’t know if my fossil is similar to any of the material he described. 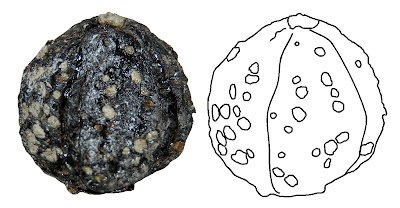 Well, at least since Río G is along a body of water, it turned out a nice place to do some bird watching. I have on previous occasions observed some of the birds along this river, with the difference that now I had a camera with a good zoom allowing me to take some nice pictures. The composite picture below include, clockwise beginning with the upper left: male Molothrus bonariensis (shiny cowbird); Butorides striatus (green-backed heron); Egretta caerulea (little blue heron); Actitis macularia (spotted sandpiper, this one has the winter plumage hence the lack of spots). 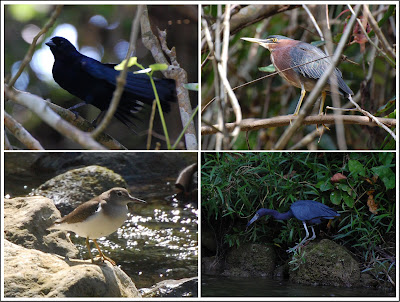 An interesting fact about the shiny cowbird is that it is an invasive species from South America, first reported from the Caribbean region during the latter half of the 1800’s (Post & Wiley, 1977a). It is also a brood parasite; in Puerto Rico it parasitizes about 16 different species of birds with a preference for the yellow-shouldered blackbird (Agelaius xanthomus) (Post & Wiley, 1977b; Pérez-Rivera, 1986). These are actually bad news as the yellow-shouldered blackbird is an endemic to the Puerto Rico bank.

On the earlier half of the day, while stalking a green-backed heron (Butorides striatus), I was unwillingly reminded to always keep an eye of where I put my feet. The reason was that while trying to stealthily sneak up to see where the bird was standing, I almost ended up stepping on a couple of fairly large green iguanas (Iguana iguana) (see composite picture below)! 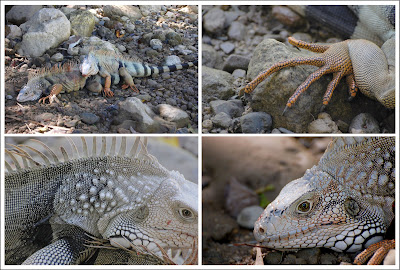 This was actually the first time I have seen green iguanas in the wild in this part of the island. Iguanas are an introduced pest in Puerto Rico therefore their occurrence in this locality took me totally by surprise, although I am aware that they are getting more common around the island, specially in the east and north where it is more humid (I believe they are still not present in the drier southern coast or that they are much less common there). Green iguanas are doing really well in Puerto Rico; the reason might be that once they reach an adult size, nothing, except maybe humans, will eat them. Perhaps another reason for their success is that until several thousand years ago there were Anegada rock iguanas (Cyclura pinguis) in Puerto Rico (Pregill, 1981); are then green iguanas just filling in an empty niche left over by the extinction of the Anegada rock iguana from Puerto Rico? This is unlikely; rock iguanas (Cyclura spp.) are adapted to xeric environments, which, unlike today, were present in northern PR during the Pleistocene (Pregill & Olson 1981). This means that the habitat that was occupied by C. pinguis in northern Puerto Rico, no longer exist there (rock iguanas are not the only xeric-adapted tetrapod to go extinct in northern PR [op. cit.]). All I know is that from now on I will have to keep an eye out for green iguanas while doing fieldwork, at least in northern Puerto Rico.