Over the last 12 years a number of fossil sirenians have been described from Eocene through Miocene deposits from India. This has not stopped as, new taxa are been discovered and described; much of the effort is spearheaded by Sunil Bajpai of the Dept. of Earth Sciences, Indian Institute of Technology and J. G. M. Thewissen of the Dept. of Anatomy and Neurobiology, NEOUCOM (Thewissen Lab). So far all the fossil sirenians from India have been collected from outcrops in the Kachchh District near the western coast of the country; this area is better known for primitive cetaceans such as remingtonocetids (Kumar & Sahni, 1986).

So far only one Oligocene sirenian is known from this region, Bharatisiren indica (Dugongidae, Dugonginae) from the Maniyara Fort Formation of Late Oligocene age (Bajpai et al. 2006). This is the oldest dugongine found in this region, and it is as old as the dugongines, Crenatosiren olseni and Dioplotherium manigualti from the Western Atlantic (Domning, 1989; Domning, 1997) and a new taxon from Puerto Rico. Dugongines are a group that is thought to have evolved in the Western Atlantic and Caribbean Region (Domning, 2001), the occurrence of B. indica seems to point to a latest Eocene or Early Oligocene origin for the group with subsequent trans-Atlantic dispersal to the Indo-African Region. An alternative scenario, is the origin of dugongines in the Mediterranean region of the Tethys Realm with subsequent east and west dispersal, unfortunately no Early or Late Oligocene dugongines are known from this region (the names of the paleobiogeographic areas based on Harzhauser et al. 2002).

During the Early Miocene there seems to have been a radiation of dugongines in this region. With at least two taxa known Bharatisiren kachchhense, Domningia sodhae* from Khari Nadi Formation (Bajpai & Domning, 1997; Thewissen & Bajpai, 2009), and another currently under study, it is an good example of multispecies communities like the ones present in the Western Atlantic and Caribbean Region (Domning, 2001). As you can see in the composite picture below, a notable difference between B. kachchhense and Domningia sodhae is the rostral deflection, which probably reflects different degrees of specializations for bottom feeding (Domning, 2001). They seem to have had similar shape of their tusks, large and more-or-less oval in cross-section, this morphology most likely aided in obtaining large seagrass rhizomes (Domning, 2001; Domning & Beatty, 2007), although probably at different levels due to the differences in rostral deflection. Interestingly, it seems that there were no post-Eocene halitheriines. 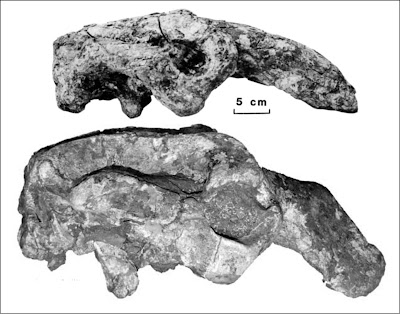 So far no post-Eocene halitheriines are known from the Oligocene and Miocene of India, at least two possible explanations come to mind: (1) they were present but no fossils have been found yet, or; (2) they were totally absent. An explanation for the second alternative could be provided by the invertebrate fauna. Based on gastropod fauna it seems that, during the Oligocene, changes in the geological settings in the Tethys Realm led to changes in the ocean currents and what was previously known as the Indo-African Region was subsequently divided into the Mediterranean-Iranian and Western Indian-Eastern African provinces of the Western Tethyan Region (Harzhauser et al. 2002). Subsequently, during the Early Miocene, further fragmentation of the Western Indian-Eastern African Province led to an increase of South-East Asian influence and the formation of the Proto-Western Indian Ocean Province; this separation was further augmented by the closure of the Eastern Mediterranean seaway during the latest Early Miocene (Harzhauser et al. 2002). The progressive isolation of what would become the Proto-Western Indian Ocean Province from a Tethyan influence might have prevented halitheriines from entering the region, especially after the Late Oligocene, leading to specialization and radiation of dugongines in this part of the world.

Domning, D. P. 1996. Bibliography and index of the Sirenia and Desmostylia. Smithsonian Contributions to Paleobiology 80:1-611.

I am really glad to see Daryl have a genus named after him. It is an honor I was hoping I could do for him someday in a Festschrift of some sort, but I am glad Hans and Sunil did it.
It is amazing how many fossil Sirenia they are finding there, particularly those with large tusks and rostral deflections.

What can I add. I have a marked dislike for academicians: ALL in every field.

At any rate check the EL BULLI of environmental blogs if you may:
http://endemismotrasnochado.blogspot.com/
Around Jupiter discourse wise while in Puerto Rico they are reaching Monito y Desecheo.

What do you think?

Brian: It is very interesting all the dugongines they are finding in India!! Makes me wonder what's going on across the border in Pakistan where sirenian fossils seems to be lacking! BTW I am turning parts of this post into a presentation for the department!

AC: -- marked dislike for academicians --
I must say that not all academicians are the same, so please do not generalize. Maybe you've stumbled upon some bad seeds. Personally I have known good and bad ones (academicians), the good ones, some which have actually become really good friends, have served as inspiration for me to be one someday.
And about the blog, it looks interesting!!