Wow! It’s been a while since I posted something. Working with some of the material collected back in August when I went to Puerto Rico to do fieldwork with my advisor has kept me busy. In addition, I had no computer for a while, just after posting the previous post, my computer’s hard drive died! Luckily, not much was lost.

Back in June I wrote about some prep work I had been doing on a sirenian skull from Puerto Rico. Well I am glad to say that four years after I collected said skull (in 2005), it is nearly done! So, here are some pictures, from the time it was collected until now. 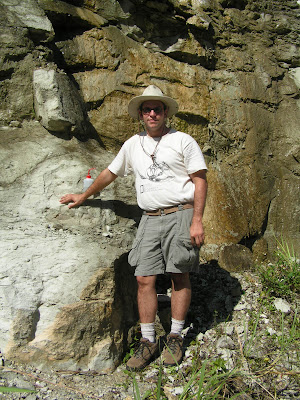 In the picture above (from 2005) I am in the outcrop with my hand next to where the fossil is. This is a Late Oligocene limestone unit from northern Puerto Rico. 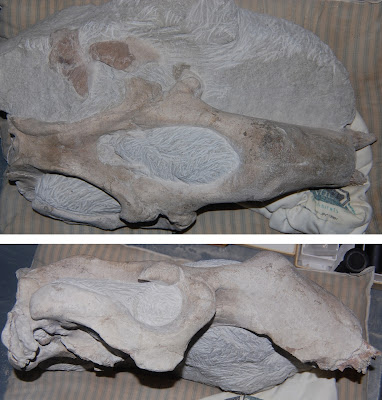 Here is a dorsal and right lateral view of how the fossil looked around 2006 (and actually it looked like that for the last 2 years). You might notice that on the top picture there is a bone floating in the matrix next to the braincase, this is the left squamosal, which is disarticulated. 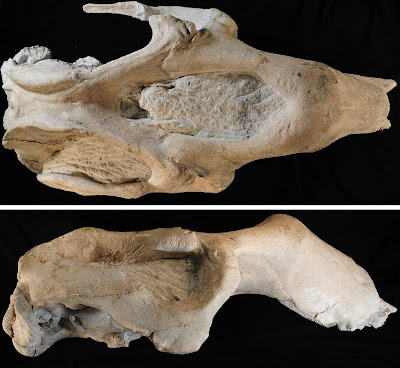 Here is how the fossil looks like now (2009), with most of the matrix gone and the left squamosal removed. Beautiful, don't you think?!

If you know something about sirenians, you might have noticed that this is a dugongine (large tusks [broken, unfortunately], thickened supraorbital process of frontal, etc.). It is actually quite similar to Dioplotherium manigaulti from the Early Miocene of South Carolina and Florida (Cope, 1883; Domning, 1989). Nonetheless, the Puerto Rican skull is older, Late Oligocene, and it also has some primitive characters that sets it apart from D. manigaulti. This skull along with another one from the same locality make up an important part of my thesis. Fortunately, some postcranial material that was collected this summer, from the same outcrop and same unit, is referable to this taxon. This material also displays differences from other known sirenian postcrania. Pretty cool stuff!!

Sirenian diversity in the past

What's wrong with the hands of Steller's sea cow

Cope, E. D. 1883. On a new extinct genus of Sirenia from South Carolina. Proceedings, Academy of Natural Sciences of Philadelphia 1883:52-54.

That certainly is a beautiful specimen! Not totally surprised that your skulls are in concretions - I suffer the same fate in California, and much of the Emlong collection were originally in concretions. It's definitely a pain, but the payoff of nice, strong, 3D skulls is worth all the work.

Sexy fossil!!!! Is this the same skull you got out of the Lares or San Sebastian Formation? I remember the whole matrix that you got out and the jumping of joy but never heard of it until today. Grant me some time to help you with the etymology and suggestions on the possible name! Oh by the way send regards to Daryl. Un abrazo

Yes this is the one from the Lares Limestone. 4 years after it was collected, it finally looks like a real skull!