Anyways, if you missed my poster presentation at the 2009 annual meeting of the Geological Society of America, here is your chance to see it. Below is the abstract (you can also see it here) as well as the poster itself.

Evolution and diversification of Dugonginae (Sirenia: Dugongidae) in the West Atlantic and Caribbean region

Sirenian evolution presumably started in the southern Tethys realm of the Old World. However, the most primitive sirenians have been found in the Caribbean region in rocks that date back to the Early or Middle Eocene, evidence that they took on an aquatic lifestyle early in their history and were able to disperse around the Atlantic. Since then, the West Atlantic and Caribbean (WAC) region has been important for the evolution of this group of mammals, with all four of the known families (Prorastomidae, Protosirenidae, Dugongidae, Trichechidae) occurring in the region. From the Oligocene through Pliocene, the predominant groups in the WAC region were members of the dugongid subfamilies Dugonginae and Halitheriinae, with the former being the more speciose of the two. In some parts of the WAC, dugongines and halitheriines are found in the same deposits, indicating that some form of niche partitioning was occurring among three or even more sympatric species of sirenians, something that is not observed among the living species.

Niche partitioning among sympatric sirenian species is most obviously explained by differences in: (1) tusk morphology; (2) rostral deflection; and (3) body size. The most primitive members of the Dugonginae are found in the WAC region. Their distinctive cranial morphology seems to have evolved as a specialization for harvesting larger seagrass rhizomes that were out of reach of the less specialized halitheriines. New fossils from Puerto Rico, Florida, and Yucatán help to reinforce our ideas about niche partitioning among sympatric sirenian species as well as establish the WAC region as the center of known dugongine diversity. 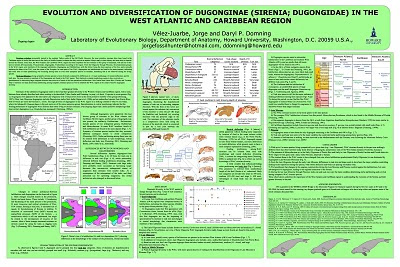 This was my first poster presentation about one of the topics that I’m working on as part of my thesis. The poster was a success! I was awarded runner-up of the 2009 Paleontological Society Poster Award. Congratulations to the first place and to the other runner-up too! It was a great meeting with very interesting talks as well as getting to spend some time with good friends!!

Enjoy the poster and feel free to ask question or make comments!
Posted by J. Velez-Juarbe at 7/11/2010