There are only a few naturally-ocurring modern species of crocodylians in the Greater Antilles, namely the endemic Cuban crocodile (Crocodylus rhombifer) and the American crocodile (Crocodylus acutus) which is widely distributed throughout the region. Here I briefly summarize what is known so far about the Cenozoic crocodylians of the Caribbean region.
Eocene
The only Eocene crocodylian known so far from the Caribbean region is Charactosuchus kugleri from the Eocene of Jamaica (Berg, 1969). Described from a mandible missing posterior part, it represents the earliest record of a Tertiary crocodylian from the Greater Antilles. Other species of Charactosuchus come from geologically younger deposits in South America (Langston, 1965; Langston & Gasparini, 1997). Doubts about the generic affinities of Charactosuchus kugleri were raised by Domning & Clark (1993) who mention that it is more similar to the tomistomine Dollosuchus dixoni from the Eocene of Europe. Brochu (2007b) upon examination of material referred to D. dixoni, agreed with Domning & Clark (1993) in that C. kugleri might belong to Dollosuchus. In that same work Brochu also considered the name Dollosuchus as nomen dubium, as it is based on material that is too incomplete to offer real information on its affinities. A skull and associated skeleton from the Middle Eocene of Belgium that had been referred to D. dixoni has been redescribed and renamed as Dollosuchoides densmorei by Brochu (2007b).
Oligocene
The next time period from which crocodylian fossils are known from the Caribbean is the Oligocene of Puerto Rico. Early Oligocene remains have been collected from the San Sebastián and Juana Díaz formations, from northern and southern Puerto Rico, respectively. Further collecting efforts have yielded material from the Late Oligocene Lares Limestone and Early Miocene Cibao Formation, both found in northern Puerto Rico. Some of the material from the San Sebastián, Lares and Cibao formations was described by Brochu et al. (2007). The fossils from the San Sebastián Fm are from collections made in the early 1900’s by Narciso Rabell-Cabrero (probably the first Puerto Rican paleontologist) and by the AMNH in the late 1980’s (MacPhee & Wyss, 1990; Brochu et al., 2007). Although these are very fragmentary, and come from different localities, they are very interesting in that they show resemblance to gavialoids (Brochu et al., 2007), and were kind of a preview of what was soon to be found. 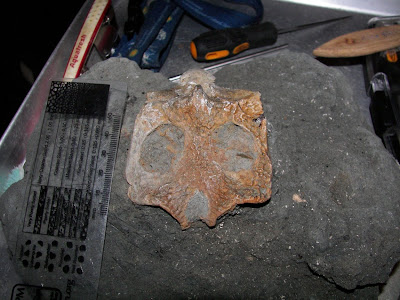 Dorsal view of skull of Aktiogavialis puertoricensis, while still under preparation; anterior end points downward. Large openings are supratemporal fenestrae.
It wasn’t until latter in 2006 when paleontologists from the Geology Department at the University of Puerto Rico, collected a partial cranium (see picture above) from deltaic deposits of the San Sebastián Fm. The fossil was described as a new gavialoid taxon, Aktiogavialis puertoricensis, that showed affinities to the South American gharials such as Gryposuchus colombianus, Ikanogavialis gameroi, Piscogavialis jugaliperforatus and Siquisiquesuchus venezuelensis (Vélez-Juarbe et al., 2007). An interesting aspects of the Puerto Rican gharial is its age, known from Early Oligocene deposits, it is the oldest gryposuchine*, a group whose other members are found in Miocene or Pliocene deposits (Langston, 1965; Gasparini, 1968; Sill, 1970; Langston & Gasparini, 1997; Kraus, 1998; Brochu & Rincón, 2004; Riff & Aguilera, 2008). Phylogenetic analysis show that gryposuchines are closely related to extant Gavialis gangeticus (shown below) and North African gavialoids (Brochu & Rincón, 2004; Vélez-Juarbe et al., 2007). This implies that they originated from a North African form that dispersed to the new world prior to the Early Oligocene (Vélez-Juarbe et al., 2007).
*Gryposuchinae: a monophyletic group that includes all the South American gharials (Vélez-Juarbe et al., 2007). The monophyly of this group has been supported by Brochu & Rincón (2004) and Riff & Aguilera (2008) as well; it has been challenged by Jouve et al. (2006; 2008). 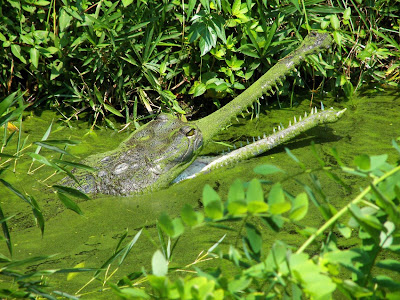 Gavialis gangeticus photographed at the National Zoo, Washington, DC.
Not much has been collected from the Late Oligocene Lares Limestone in northern Puerto Rico. A vertebra was described in Brochu et al. (2007), but it is not informative enough; some isolated teeth resembling those of long-snouted croc have also been found. Other teeth, though, are much larger and seem to be from a short-snouted form (see picture below). 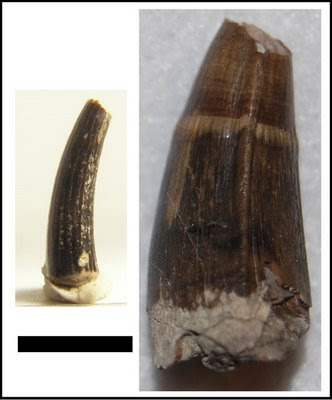 Crocodylian teeth from the Lares Limestone, northern Puerto Rico. Scale bar = 1 cm.
Miocene
The Miocene crocodylians of the Caribbean region are still a mystery. Early-middle Miocene crocodylian remains have been collected in Cuba, Dominican Republic and Puerto Rico (MacPhee & Wyss, 1990; MacPhee et al., 2003; Brochu et al., 2007; Brochu & Jiménez-Vázquez, 2014). The Dominican material is still undescribed, hence their affinities are unknown. The fossils from Puerto Rico, consisting of several associated cranial elements (shown below) were collected from the middle Miocene age Cibao Fm (MacPhee & Wyss, 1990; Brochu et al., 2007).  The Cibao fossils include a partial dentary, frontal and partial left squamosal, and show a combination of features that excludes it from being a gavialoid, alligatorid, Crocodylus or any other extant taxon (Brochu et al., 2007). Similarly, there are some unusual crocodylian remains from the early Miocene Lagunitas Formation in Cuba (Brochu & Jiménez-Vázquez, 2014). This implies that at least starting in the early Miocene (and probably even earlier) Puerto Rico, and other islands in the Caribbean , where probably home to an endemic group of crocodylians. 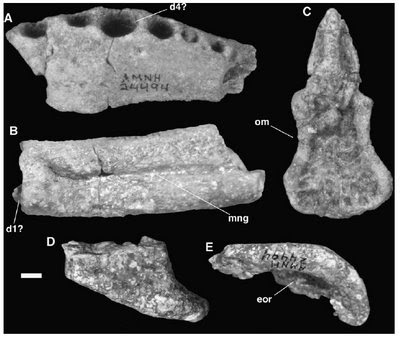 Crocodylian remains from the Early Miocene Cibao Formation of northern Puerto Rico. From Brochu et al., 2007.
Other radiations of island-endemic crocodylians include the extinct Cenozoic Australasian Mekosuchinae and the extant Osteolaeminae, which includes two extinct island endemics: Voay robustus, from Madagascar (Brochu, 2007a; Bickelmann & Klein, 2009) and possibly Aldabrachampsus dilophus, from Aldabra (Brochu, 2006), both from Quaternary deposits.
Quaternary
Finally, during the Quaternary the Cuban crocodile, Crocodylus rhombifer (shown below) had a more widespread distribution. Restricted today only to the south-central coast of Cuba and adjacent Isla de Pinos, fossils referable to this species have been found in Quaternary deposits in Cuba (Varona, 1984), Grand Cayman (Morgan et al., 1993), and the Bahamas (Olson et al., 1990; Franz et al., 1995; Steadman et al., 2007). Based on this, we might ask some questions such as: was C. rhombifer present in the other Greater Antilles? Did the arrival of C. rhombifer replaced an extant group of endemics?  Only more fossils will help answer these question. 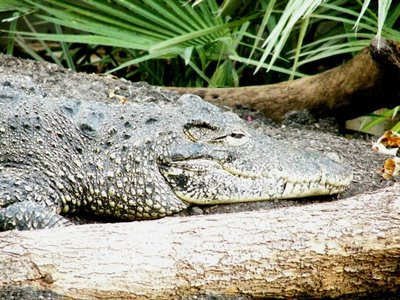