It’s field season of course, so I’ve been in Puerto Rico for a while now, unfortunately with my car dead, it has been difficult to do things. I actually wanted to leave fieldwork for latter in the summer and do some lab work now, and I have, to some extent. The lab work includes preparation of some crocodylian postcranial material and a sirenian skull. Of course, I haven’t really been able to keep myself from doing some fieldwork. So here’s some of what has been going on lately.

The crocodylian material consists of vertebrae, ribs and dorsal osteoderms from the Early Oligocene San Sebastián Formation in northern Puerto Rico (see picture below). Fossil crocodylians have previously been collected from this formation (go here for a previous post on Caribbean crocs).  The material I am currently preparing has been slowly collected (thanks to a dangerous overhang) since 2006 from a unit that sits several meters below the unit where the cranium of Aktiogavialis puertoricensis was found (they were found the same day). With no known cranial material associated to this fossils, it cannot be referred to Aktiogavialis. 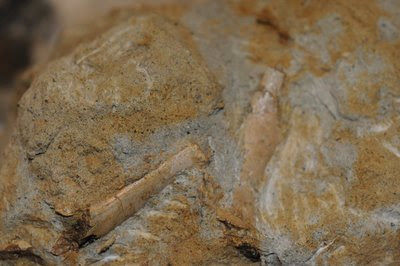 A couple of crocodylian ribs (center and lower left) from the San Sebastián Fm. This matrix is no fun.

The sirenian skull, originally found in 2003 and latter collected in 2005, belongs to an adult individual and it comes from the Late Oligocene Lares Limestone. Another skull, from a subadult individual that was collected in 2003 just meters away, both belong to the same dugongine taxon; these are part of my thesis project and will be properly described at some point. They represent the first sirenian cranial remains from this formation; sirenian fossils are known from the underlying San Sebastián Fm and overlying Cibao Fm (Reinhart, 1959; MacPhee & Wyss, 1990). 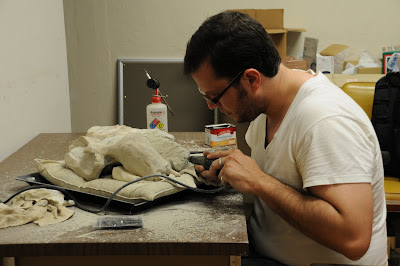 Trying to remove some annoying matrix from the Lares sirenian.

So far I’ve been to the field once. Colleagues from the Geology Department at UPRM and myself went to northwestern Puerto Rico, first to visit some people who had some fossils they wanted identified and then to do some actual fieldwork. The first part of the day was somewhat disappointing, as some of the fossils we saw were quite nice and useful, but, sigh, like on previous occasions, the owners of the fossils are unwilling to donate or loan these for research purpose. I always wonder what these people intend to do with the fossils?! Ignorance about geology and paleontology (probably science in general) as well as the lack of a natural history museum in the island is to blame (in part).

Anyways, after a very nice lunch and a lot of rain, we were able to finally visit a new outcrop of the San Sebastián Fm, which is very close to one of my favorite localities, Rio G. Although there is a very interesting exposure of the San Sebastián Fm, it was very unproductive in terms of vertebrates. Some jumbled fish bones, a shark tooth and a bunch of turtle shell fragments was all we found.

Invertebrates were more numerous and nicely preserved, especially crabs. The fossil crustaceans fauna of Puerto Rico was largely unknown until recently (see Schweitzer et al. 2006, 2008). Schweitzer and colleagues looked at fossil crustacean from Cretaceous, Oligocene, Miocene and Pleistocene and report about 13 species, seven which are new. In our new locality we found about three taxa (see picture below). 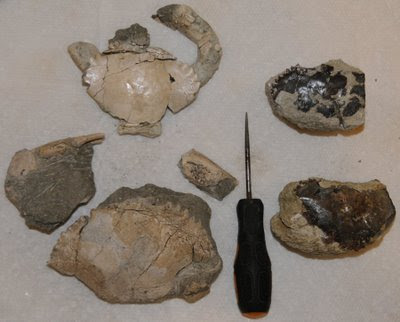 Reinhart, R. H. 1959. A review of the Sirenia and Desmostylia. University of California Publications in Geological Sciences 36:1-146.