A day in the field: Cretaceous

Cretaceous sedimentary rocks are found in Puerto Rico, especially in the southwest part of the island where several well-exposed limestone units are exposed. Our destination this time was a new outcrop of the Parguera Limestone. Located in the Southwest Igneous Province (Jolly et al., 1998; Schellekens, 1998), this formation, which ranges from Santonian to Campanian, has been divided into three units, the lower Bahia Fosforecente Member, the middle Punta Papayo Member and the upper Isla Magueyes Member (Almy, 1965). Like a lot of the Cretaceous limestone units in the Caribbean region, the age has been determined with the aid of the rudist bivalve assemblages, which have been divided into several biozones (Rojas et al., 1995). 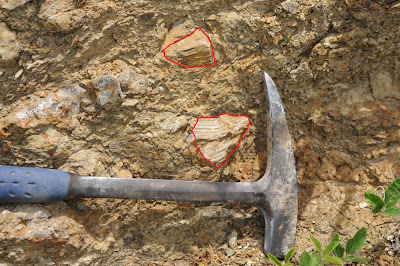 A couple of rudist bivalves (red outline). During life the position of these was with the narrowest part semi-buried in the substratum (elevators). As we can see these are sideways.

There was some debate as to whether the outcrop we went to was part of the Bahia Fosforecente or Punta Papayo, the former which has been dated as Santonian whereas the latter as Campanian in age. Lithologically, this locality is most similar to the Bahia Fosforecente member. As we searched for fossils, we found several rudists (see picture above). These seem to have been transported, as these are elevators, but were found on their side. Although these were mostly complete, I must say I haven’t had the time to look in detail at their morphology, hence they remain nameless, for now.

One of the unknown rudist we collected (left); fragment of Macgillavryia nicholasi, notice the cell pattern (right).

Other rudists that were more fragmentary, were actually much more helpful for pinning down the age of the rocks here. Several fragments of the large* rudist Macgillavryia nicholasi were found and we were able to make an ID based on their diagnostic cell patterns (picture above) (Rojas et al., 1995). The occurrence of M. nicholasi indicates that these deposits are Campanian in age, as they are found in the Barrettia monilifera biozone of Rojas et al. (1995), meaning that these units are probably part of the Punta Papayo member.

*Some specimens reaching a diameter up to 1 meter!

In terms of the depositional environment, the Parguera limestone represents (mostly) slope to basin environments (Almy, 1965). This outcrop is different. The lithology here indicates that this was likely a nearshore deposit in a moderate/high-energy coast; sandy flat pebble conglomerates were the giveaway. 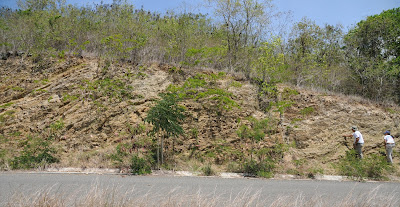 View of the outcrop of Parguera Limestone, rocks are dipping to the south (towards the left). To the far right, HSM & DLOA search for fossils.

Leaving what I think is most exiting for last; the whole reason for our visit to this outcrop was the search for fossils of tetrapods. One of us (DLOA) had found, on a previous visit, a non-fish vertebra*! We did not found anything else, but if we can get an id on what we have so far it would be a first! So, wish us luck!

*Update (Aug/2009): it most likely is an archosaur caudal vertebra!! Hat tip to MTC for the id!