A day in the field, Tertiary

This time our field area is in northern Puerto Rico. We decided to visits a couple of outcrops of the Late Oligocene Lares Limestone. If the name of the formation sounds familiar you either know about the geology of Puerto Rico or, have read about it on a previous post.

One of these localities (see picture below), I have visited at least since 2000, and up until very recently, we thought that the only formations present there were the Early Oligocene San Sebastián Formation and the overlying Lares Limestone. Now, thanks to new information regarding the stratigraphy of the Tertiary limestones of the north coast of Puerto Rico (Ortega Ariza, 2009), we know that in this locality, overlying the Lares Ls, there are also units of the Montebello Limestone. The age of the Lares Limestone and Montebello Limestone were designated as Late Oligocene – lower Early Miocene and upper Early Miocene, respectively (Seiglie & Moussa, 1984). New data, using strontium isotopes obtained from tubes of the pelecypod Kuphus incrassatus, seems to indicate, instead, that both formations span the Late Oligocene (Johnson et al., 2006; Ramírez et al., 2006; Ortega Ariza, 2009). If this is correct (more samples need to be run, hint, hint!!) I will like this outcrop even more (sorry, can't hide my love for the Oligocene)!! 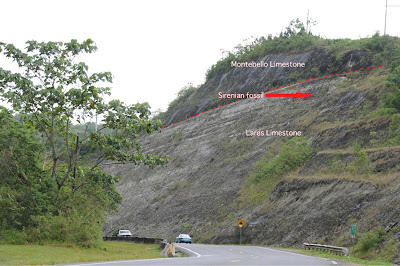 Here's the one of my favorite outcrops, where the Lares and Montebello limestones are exposed. The arrow points to a sirenian fossil that is yet to be collected.

Of course, what I’ve been mostly searching in these localities are sirenian remains, but like I mentioned on that previous post, other vertebrates have also been collected. Interestingly, the best sirenian remains have been collected from the upper Lares Limestone, with a total (so far) of two skulls, and a set of nine articulated vertebrae (see picture below). There are more fossils but those will be collected in due time. As for the sirenian skulls, well, they are an important part of my thesis work and I will discuss them at some point in the future. 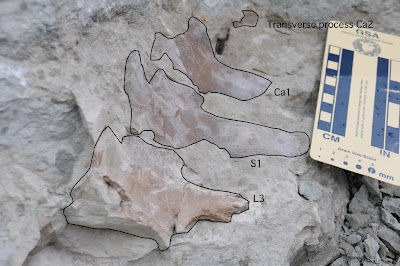 Some articulated sirenian vertebrae, these have already been collected. This is an earlier picture, there were three more vertebrae behind the one labeled Ca1, the ones anterior to L3 were collected earlier.

Great post, Jorge!
Seeing those vertebrae articulated and in situ is encouraging, I wish I could visit Puerto Rico and collect with you. Though it seems I can never escape the Miocene, I agree that the Oligocene is by far the most exciting time. Everything we wish we knew about marine mammals, especially tethytheres, happened then, and aside from what Al Sanders is getting in the Carolinas and you are getting there is little fossil record of it in the western Atlantic.

Hi Brian! Thanks!!
I am sure at some point we'll go together to PR and collect.
I have always felt that the Oligocene is understudied/underrepresented. In Puerto Rico there are about five formation that fall within the Oligocene, those are my favorites, and also where I do most of the collecting. It is an important period as by then we see the first Metaxytherium as well as the first dugongines; it is also important for the origin of the Greater Antillean Land Mammal Fauna. And of course, I also keep my eyes open for other marine mammals.