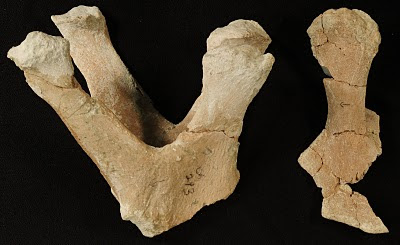 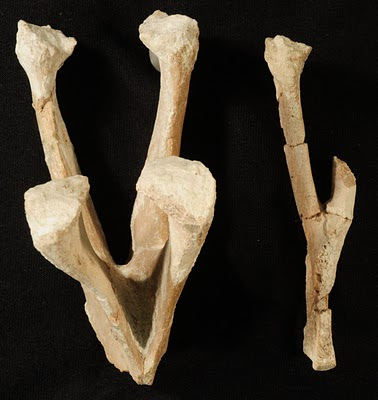 So, leave a comment, let me know what you think about this unusual bone!
Posted by J. Velez-Juarbe at 3/04/2010

Jorge, why do you think it's developmental rather than pathological? Is there no secondary bone growth? It does seem like the left side of chevron 3 is oddly shaped (or is that just postmortem deformation?).

I don't know if you've prepared the vertebrae yet, but there might be some effect on the corresponding caudal vertebrae, whether it's pathological or developmental.

The reason I think is developmental is that there is no secondary growth, at least none that is obvious. The bones are deformed, postmortem.
Yes, I've prepared the vertebrae and they seem normal. Actually, the whole specimen is a bit weird, the vertebrae and ribs are osteosclerotic but not pachyostotic. At least not to the degree seen in other specimens (even older ones or taxonomically different). Other postcranial material from the locality is similar. It seems this particular species (a dugongine) displays this plesiomorphic condition.

I agree that this seems to be a developmental anomaly, and not pathological sensu stricto. I think I've seen something similar in some modern odontocetes, but never a sirenian. It would be interesting to survey modern Trichechus and Dugong collections for this sort of thing to see if this is found in any sort of frequency. My first guess would be that it isn't.
Embryologically, this could probably be explained in the same way as the double-headed ribs found in some modern and fossil mysticetes, like in Butch Dooley's paper from several years back. Haemal arches, transverse processes, and proximal rib portions all come from related mesenchyme, and it would make sense to consider that developmental issues that could affect one would affect the others sometimes too, right?