Having finally made it to San Juanico late Tuesday night, we were finally settled near our field localities. We are staying at a bay that looks to the southeast, so we get to see the sunrise over the Pacific ocean. 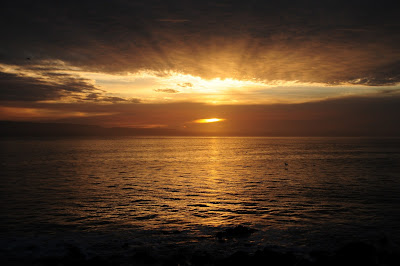 We were joined today by Gerardo Gonzalez-Barba of the Universidad Autónoma de Baja California Sur and three of his students, all the material collected will eventually end up in the collection at that institution under his care. Some of the outcrops we'll visit are right along the shore, walking distance from where we are staying. Here the early Miocene San Isidro Fm. is exposed (see picture below, in the background). In the foreground you can see pillow lavas, part of a large lava flow north of the bay. The bay was formed by the differential resistance to erosion of the two rock types, the more resistant pillow lavas form the promontory, while the sedimentary rock is being eroded by the ocean. 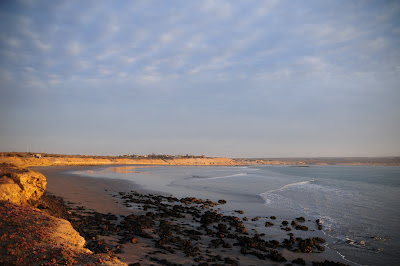 We've had some success so far, having collected quite a number of shark and ray teeth as well as marine mammals, including some pinniped bones, part of an odontocete cranium and a nearly complete sirenian skull!!! 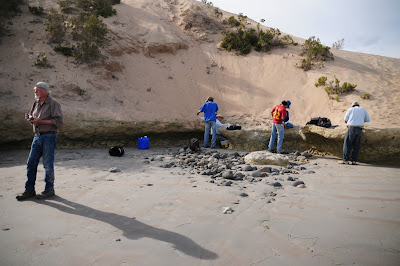 Above: In the background Daryl finishes the jacket on the sirenian skull (it was his birthday so he was really happy to collect a skull of his favorite group of sirenians), Fernando of the UABC is helping him. In the foreground, Larry ponders into the distance, is he thinking of marine mammals, bungalows or just enjoying the sunset... who knows.

Previous post in this series:
Dispatches from the field: Baja California, Pt. 1

Fieldwork in Baja California was made possible through an NSF EAR grant to D. P. Domning & L. G. Barnes. The text in these posts reflect my own opinion and not those of the granting agency or institutions to which I’m affiliated.
Posted by J. Velez-Juarbe at 3/16/2012