This day we headed to La Purísima, to look at more early Miocene outcrops. Specifically we wanted to relocate the type locality of Dioplotherium allisoni, a large-tusked dugongine that is known by the type, a fragmentary mandible, and some referred specimens from California. We still know very little of the morphology of this animal and would like to find more of it. 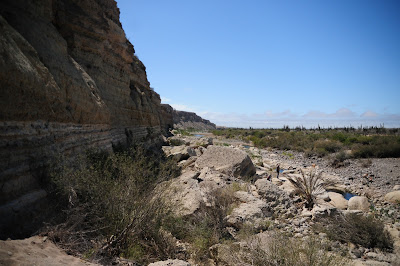 On the way there, we stopped at a locality where the late Oligocene San Gregorio Fm. and the early Miocene Isidro Fm. are exposed. (above). 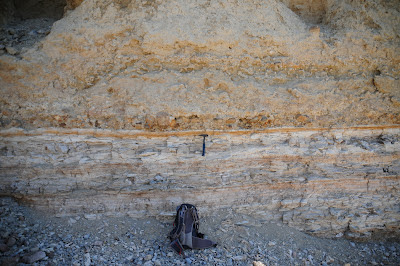 Sirenian ribs as well as a variety of fish teeth were quite common in the basal conglomerate (just above my rock pick) of the Isidro Fm. (above).

After our stop to look at the contact between the San Gregorio and Isidro formations we continued our way to La Purísima in search of the type locality of Dioplotherium allisoni. To our luck, Kilmer (1965) in his description of the species, provided a very detailed description of how to get the the locality, that plus our colleague from UABCS, Gerardo González, knew the way as he had been to the locality on a previous occasion. 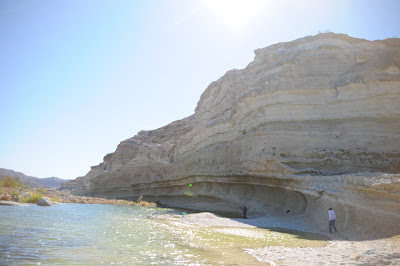 The type locality of Dioplotherium allisoni in La Purísima (above). Something that Kilmer didn't mention was the the vast majority of the sirenian fossils were inaccessible as they occur nearly exclusively on the bottom of the bed that forms the ledge. 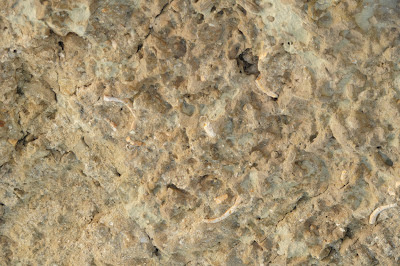 The bottom of the ledge (above). Click on the picture and you'll see some of the sirenian bones in the layer (mostly ribs).

Luckily for us, parts of that bed were exposed at more workable levels. Some of us actually found some bones, and not just the usual sirenian ribs and vertebrae, but we found two scapulae, probably belonging to the same individual! One of them, seen below, had something else in the matrix. When I turned it around there was a desmostylian molar fragment, the first one we know about from this formation!! So with that, I have actually found and collected nearly one of every group of marine mammals (at least the ones from the northern hemisphere)! 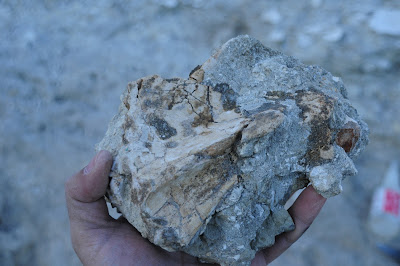 One of the sirenian scapulae from La Purísima, kind of small compared to other sirenians, a juvenile? a small species of sirenian? It remains to be sorted out!

For past entries of this series:

Fieldwork in Baja California was made possible through an NSF EAR grant to D. P. Domning & L. G. Barnes. The text in these posts reflect my own opinion and not those of the granting agency or institutions to which I’m affiliated.
Posted by J. Velez-Juarbe at 3/20/2012

That really looks like cliffs of the Purisima Formation near Halfmoon Bay in Northern California...