A short trip to Panama

A couple of Friday’s, no, about a year, ago one of my advisors, Nick Pyenson (NMNH), and I were on a flight on our way to Panama. The main purpose of this trip (only a weekend long) was to collect a nearly complete skull of an odontocete, (toothed whales), which we originally thought was a squalodontid (but it isn't, more on that later). We learned of the fossil through Aaron O’Dea of the STRI/CTPA, as one of his students, Dioselina Vigil had spotted the skull while prospecting along the shores of a town called Piña, on the Caribbean coast of the country. The rocks exposed in that area, best seen at low tide (see picture below), are part of the Chagres Formation (Fm.), a sandstone unit that has been dated to between 8-6 million years ago (Ma) (Late Miocene) (Collins et al., 1996). 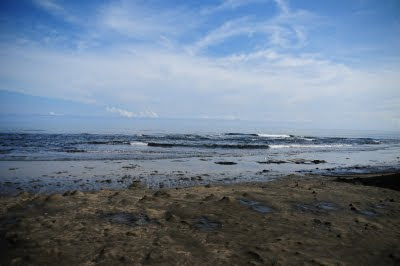 View of the Caribbean Sea, near the town of Piña, Panama. The rocks seen in the lower half of the picture are part of the Chagres Formation.
By Saturday morning we were in the outcrop, together with Aaron, Dioselina and her brother, as well as other colleagues from STRI and a couple of visitors from Temple U. Our main purpose was to dig out the squalodontid skull as well as do some prospecting. In order to collect the skull we had to make the most of the low tide, which was the only moment that it would be exposed. As we began digging around the fossil, we realized that it was going to take longer than we had expected. Therefore we divided the group, some went prospecting while four of us stayed behind digging out the skull. After a while we realized that the fossil consisted of not only the skull, but that also the mandibles were there. In all, it took us about four hours, with the tide creeping upon us by the last half hour (see pictures below), to collect the fossil. Needless to say we successfully collected the squalodontid skull, and the prospecting team made some interesting finds as well, including additional marine mammal remains (both, whales and seacows!). 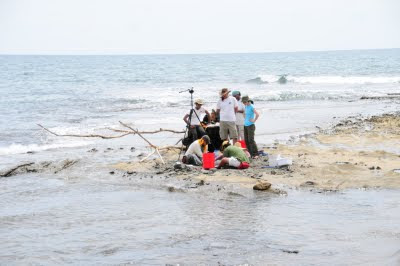 Above: Nick, Dioselina and I finish one of the small jackets. This whole area had been exposed earlier that day, this picture was taken within the last hour of low tide. As you can see the sea is creeping around us. 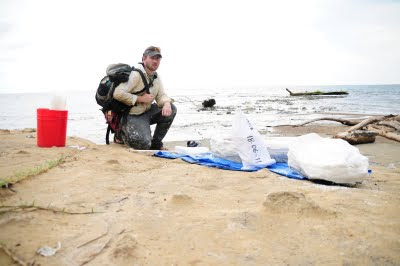 Above: Nick, next to the jackets containing the odontocete remains. Notice in the background that the area where we collected the fossil (between the logs) is now completely covered by water.
The skull is actually not the first marine mammal fossil known from Panama; it is, however the most complete/diagnostic so far. Back in 2010, Mark Uhen and colleagues reported marine mammal remains from three other rock units in Panama: the Tobabe Fm. (7-5 Ma), Gatun Fm. (12-8 Ma), and the Culebra Fm. (23-20 Ma). From the Tobabe they described a thoracic vertebra of a balaenopteroid (the group that includes rorquals and gray whales), from the Gatun odontocete ribs, and from the Culebra a dugongid (seacow: dugong) tail vertebra (Uhen et al., 2010).
Other interesting fossil vertebrates that have been collected from the Chagres Fm., include a fossil marlin, Makaira panamensis which was described by H. L. Fierstine in 1978. This is of particular interest as during out expedition, we also found marlin remains, including one that seems to be complete, head to tail (see picture below)! 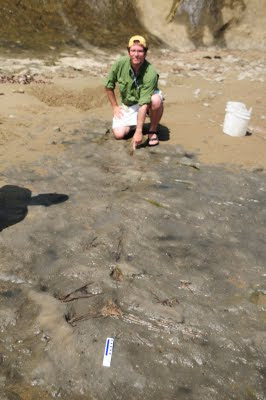 Me and the fossil marlin. The tail is the fan or boomerang-like structure seen in the foreground (near the bottom of the picture) I am in the background pointing to the rostrum/beak. This is probably the most exciting fossil fish I’ll ever found!
These finds, as well as the chances finding even more, mean just one thing, we will have to go back to Panama!
You can find out more about this trip by following these links:
Pyenson Lab
And at Smithsonian Ocean Portal where you can find the following:
-Paleobiology Blog: Part 1, Part 2, Part 3
-Slideshow
-Time-lapsed vide of the excavation
Collins, L. S., A. G. Coates, W. A. Berggren, M.-P. Aubry & J. Zhang. 1996. The late Miocene Panama isthmian strait. Geology 24:687-690.
Fierstine, H. L. 1978. A new marlin, Makaira panamensis, from the Late Miocene of Panama. Copeia 1978:1-11.
Uhen, M. D., A. G. Coates, C. A. Jaramillo, C. Montes, C. Pimiento, A. Rincon, N. Strong & J. Velez-Juarbe. 2010. Marine mammals from the Miocene of Panama. Journal of South American Earth Sciences 30:167-175.
Posted by J. Velez-Juarbe at 7/13/2012

That looks like a pretty wild location to dig something up! Did water ever come up and fill in the trench? To be honest, I'm really surprised the waves are that small there.

I had a similar experience (albeit with much smaller fossil) two summers ago - I collected a partial lower jaw of a Parapontoporia that was exposed in the base of a cliff, but was only exposed between small waves - it was low tide, but the tide was already coming in, and the next low tides for two weeks were much higher. It was my last shot to do it, so I basically used a large chisel and excavated a small block while the thing was in a foot of water; I actually got all of it, and it had about twelve teeth in it.

I'm looking forward to pictures of the fossil!