So a few days ago,  Nick and I arrived to Chile, where we'll be for the next couple of weeks. The purpose of this trip, is to look at collections and visits Cerro Ballena and some other localities in the Atacama region. Some of our colleagues were waiting for us in Santiago, David, Carolina, Roberto and Anita who live there, and Mario Cozzuol who had arrived earlier in the week from Brazil. That afternoon, we headed out to Caldera, in the northern part of the country.
We are staying in some lovely cabañas, with a nice view to the Bahía de Caldera and the city. 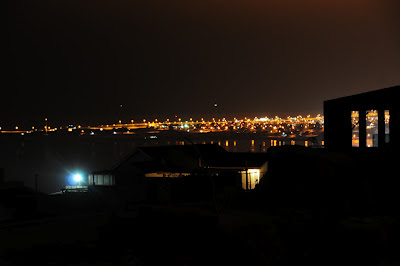 The view at night from the cabañas. 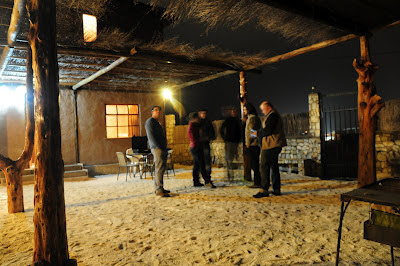 At the cabañas, talking with the owner.

The next morning we visited the Museo Paleontológico de Caldera, where we met with another of our colleagues, Mario Suarez. At the museo we spent the day looking at the material collected from Cerro Ballena and nearby localities. The fossils from this site includes a wealth of marine mammals, mostly whales and dolphins, but also, aquatic sloths (more on that later)!! 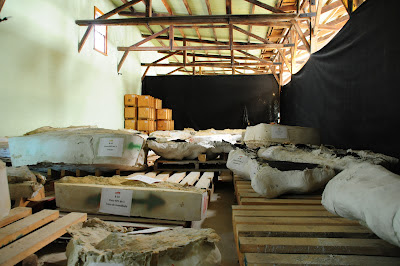 Here's a view of some of the material collected from Cerro Ballena, nearly each one of those jackets have remains of baleen whales!!

So, stay tune for more upcoming entries from this trip. Also, go over to the Pyenson Lab where there will be posts about this trip as well.
Posted by J. Velez-Juarbe at 7/20/2012