Like I mentioned in the previous post, we returned to the Cerro Ballena site. There we looked for fossils that might still be exposed in the outcrop. We didn't find much, but we did found some interesting stuff. 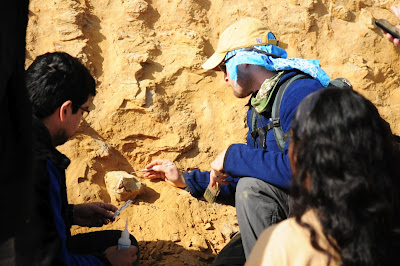 David, Nick and Roberto, dig a baleen whale vertebra in Cerro Ballena. Several, nearly complete skeletons were previously collected at this locality and are waiting to be prepared at the Museo Paleontológico de Caldera. 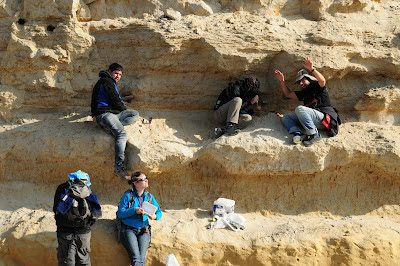 An interesting find was the remains of a billfish. Here David, Cony and Roberto collect the remains, while Nick and Carolina were taking notes on the locality and horizon. Missing from the picture are Ana and Mario, who were in another part collecting remains of the aquatic sloth, Thalassocnus.

We also visited some other localities, including one that yielded remains of Pelagornis chilensis amongst other interesting stuff! 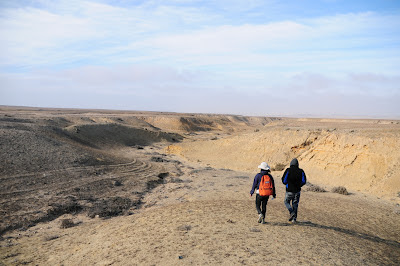 Ana, David and I as we walk to another sites where remains of other marine vertebrates have been collected.

Unfortunately, poachers also know of these sites and go looking for shark teeth and other fossils to sell, which is illegal! So in many places we knew the location of bone beds because of the shattered remains of material thought as uninteresting to poachers. 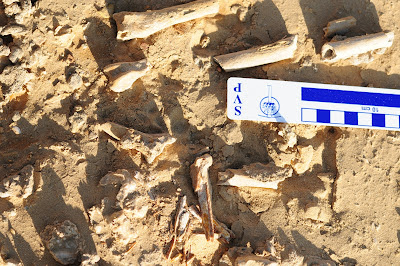 The example above show some penguin bones that were left behind by poachers. These was actually my first encounter with penguin bones in the field!

More posts to come, so stay tuned!!
Also, go see parts 1 and 2 of this series!